Nothing is more important to us on Earth than the Sun. Without the Sun's heat and light, the Earth would be a lifeless ball of ice-coated rock. The Sun warms our seas, stirs our atmosphere, generates our weather patterns, and gives energy to the growing green plants that provide the food and oxygen for life on Earth. - history.NASA.gov

This bracelet and necklace serve as a testimony to the power and influence of our Sun and of it's planets and moons. High quality beads and natural gemstones decorate this attractive bracelet and necklace and remind us that the Sun and Earth will provide for us the tools to grow and thrive. They also act as a reminder to care and protect these precious resources.

Elegant and stylish, this adjustable red string protection bracelet does more than just look pretty. This bracelet also boasts a total of five copper beads to promote health and a sense of calm. Our artisans say that the three beads in the center symbolize divine wholeness, completeness, and perfection.

Because copper a good conductor of energy, metaphysically, it is known to relieve stress, anxiety, and inflammation by promoting the flow of Chi.

When worn against the skin, components of copper such as zinc and iron, can be absorbed in minute quantities into the bloodstream to help flush out toxins.

Hand strung in Tibet and sourced and cleansed by One Lucky Wish. There's really no better way to wear copper with such style!

Love my lucky rope bracelet. This bracelet are really good quality and last long. I haven’t removed mine for almost a year and still in good shape. 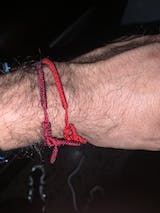 I purchase this beautiful black cooper bead bracket for my granddaughter . She loves it ! It looks really nice on her . It’s perfect , well made and very elegant . Yes , elegant !

Beautiful simple tread with beautifully cut beads. I love it.

Includes delicate small beads. This is a very sturdy, but very thin and delicate bracelet.  Not for young children.

In ancient times, people saw asterisms (pattern of stars) and made up all kinds of stories about mythological creatures and characters which they associated with the star patterns. As astronomers began to make maps of the stars, the named asterisms were included in maps and called constellations.Over time astronomers adopted 88 official constellations and assigned areas of the sky to specific constellation names.The 12 major constellations in the zodiac family can all be seen along the ecliptic. They are: Aries, Taurus, Gemini, Cancer, Leo, Virgo, Libra, Scorpio, Sagittarius, Capricorn, Aquarius, and Pisces.The symbols in this astrological system represent various metaphysical and spiritual concepts and ‘truths’. One of the most prominent being that all astrological zodiacs are as interconnected as humans are to one another. One love.This bracelet signifies the inter-connectedness between all constellations

A powerful protection stone, Onyx absorbs and transforms negative energy, and helps to prevent the drain of personal energy. Red aids the development of emotional and physical strength and stamina, especially when support is needed during times of stress, confusion or grief.

An Onyx stone helps in deflecting inner and outer negativity and protects the wearer from the 'evil eye' or bad luck that is caused due to jealousy or negativity of some sort in the mind of others.

Green Onyx is associated with the planet Mercury, which is known to represent intelligence, elevated brain power, and enhanced memory. It is meant for anyone who wants to speak truth from the heart. This mineral opens up and actives the heart, in alignment to the brain, producing honesty and powerful realizations.

Onyx is first mentioned in the Book of Genesis: “And the gold of that land is good: there is bdellium and the onyx stone (2:12). It is mentioned 7 times in the Book of Exodus, where the Onyx is set in the ephod and the breastplate of the priests of Israel.

First off thanks for shipping my product same day! I received the product in perfect condition and it even included a gift bag! I am so excited to give this as a present to my wife! Thank you!! 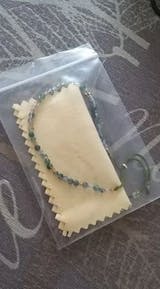 Chakra Bracelets are worn to keep the seven Chakras at their right energy levels causing the wearer to feel more balanced. The bracelet helps to keep the chakras open and replace negative thoughts with a positive outlook towards life.

For Hindus and Buddhists, the hamsa represents the chakras, the five senses, and their associated mudras (hand gestures) that re-direct energy flow throughout the body.

However, anyone can wear the Hamsa regardless of their faith or beliefs. ... The Hamsa Hand is an ancient Middle Eastern amulet symbolizing the Hand of God. In all faiths it is a protective sign. It brings its owner happiness, luck, health, and good fortune.

Our 7 Chakra bracelets are made of semi-precious gemstones, representing the chakras, and lava stones that also have a grounding energy. Lava stones can also be used to add essential oils.

Received red bracelet as gift. Also purchased 2 sets for friends. Believe in them so bought shakra bracelet for I believe I need help with them.

Regular price $29.99
/
Tax included. Shipping calculated at checkout.
No reviews
These Tibetan Six-Words Healing Bell Bracelets have been used for centuries for healing and meditation purposes. They help you restore the normal vibratory frequencies of diseased and out-of-harmony parts of the body, mind, and soul.

Many believe that in order to succeed in this life and achieve all your goals, you need to protect yourself from negativity, bad feelings, and the evil eye of people around you that may affect you carelessly, unintentionally, or on purpose.

The Hamsa hand symbolizes the Hand of God and in many cultures and faiths, it is a protective sign. It is known to bring it's owner happiness, luck, health, and good fortune, but it's primary spiritual use is for protection against the evil eye.On this bracelet, the Hamsa hand acts as a second layer of protection, in addition to the red string.Wearing a Red String protection bracelet actually has many positive effects. In quite a few cultures a red string bracelet is believed to have magical powers. People wear the red string bracelet to attract their soul mates, to become successful in their careers, to improve their relationships and to protect themselves against all negative things in life. It is said that the person who wears it will see his/her life improve.

I love this bracelet and I have not been able to take it off.

So glad to hear! Much luck to you and yours!

Regular price $12.27 Sale price $10.27
/
Tax included. Shipping calculated at checkout.
No reviews
The Chinese Traditional Feng Shui Red String Bracelet is believed to attract good luck and wealth into your life. It is also said to protect you from negative energy and spirits. Made with copper coins and red string, this bracelet is a must-have accessory for anyone looking to improve their fortune.

Regular price $45.99
/
Tax included. Shipping calculated at checkout.
No reviews
In Norse mythology, the Ouroboros was a dragon, also called Jörmungandr, which grew so large that it could encircle the world and grasp its tail in its teeth.It symbolized eternity and endless return.Like the sun, the Ouroboros underwent a journey of its own. Over a millennia old, it is known as the oldest symbol in Alchemy.  It started in 1300 BC in Egypt, made its way through Ancient Greece, and finally into Nordic culture in the middle ages.This figure embodies infinity and symbolizes the power of natural forces. Order this gorgeous handcrafted cast medallion to carry a piece of the great dragon's power with you wherever you go!

The Vikings often wore wolf symbols going into battle, and now you can wear your own into your daily urban battle. The wolf was an important to the Vikings, representing raw power and force, which was to be respected or feared.

The wolf can go either way in the Nordic myths.  The symbol can represent chaos and disruption, or bravery, loyalty and wisdom.  The Vikings wore bracelets such as this one as a symbol of their allegiance to their chieftain. Oaths sworn on such an arm ring could not be broken.

The most famous wolf in the Norse world was Fenrir, one of the sons of Loki, the Norse god of mischief and deception. Tricked and chained up by the gods who feared his strength, at Ragnarok, a great battle, he is destined to break his chains and run through the Norse cosmos devouring everything before him.

In Norse Mythology, the wolf Fenrir was a symbol of evil and unrest who eventually kills Odin.  Odin is the oldest and wisest of the gods in Norse mythology, and the one who presides over Valhalla.  However, the wolf was also associated with warriors, and Odin had two wolves as loyal companions.

This arm ring is perfect for the modern Viking who feels the power of the wolf within themselves.

Regular price $39.99
/
Tax included. Shipping calculated at checkout.
No reviews
The Vikings used armbands such as this Dragon Bracelet, as dragons represented powerful magic, heroism, strength, and bravery. In Nordic Mythology, there were three dragons in which the Vikings believed:  Nidhogg, Jorungand, and Fafnir. NidhoggIn Norse mythology, an ash tree Yggdrasil supports the whole universe. Nidhogg entangled and gnawed the root of Yggdrasil. He wanted to uproot Yggdrasil and destroy the universe. He is often referred to as “Malice Striker” in ancient Norse poems. JorungandTo the vikings, Jorungand dwells in the sea on a global level, encircling the Earth and biting his own tail, When they set out on the seas, their ships were decorated with dragons in solidarity with dragon powers of magic and protection. FafnirFafnir was a dragon exhibiting immense strength, stamina, durability, and with the ability to create illusions and exercise mind control.  Just like the Vikings, ﻿You can now wear this powerful dragon bracelet in solidarity with the powers of the beasts of ancient times.